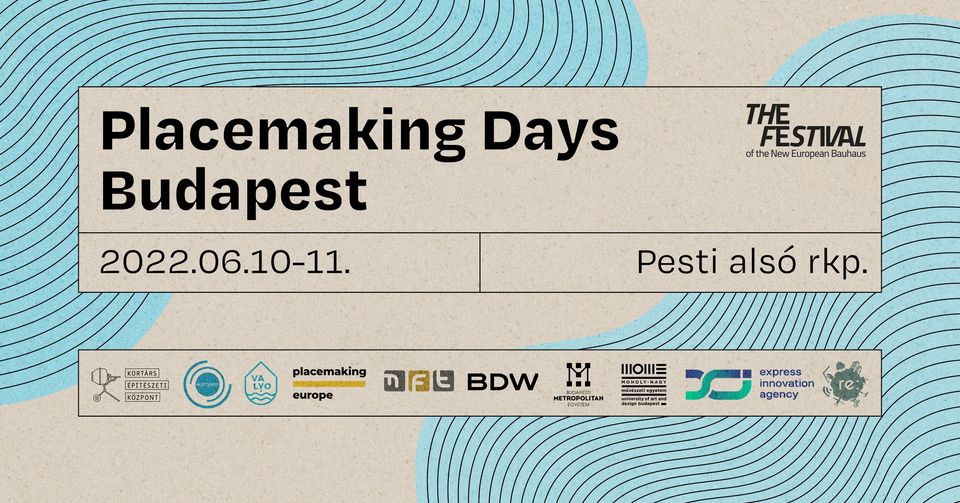 With the start of the summer, the people of Budapest can once again take possession of the Pest embankment, which we celebrate with a truly appropriate program: this year with KÉK, VALYO, MOME, re:Kreators and Placemaking Europe we organise the Placemaking Days in Budapest for the first time, joining the New European Bauhaus Festival programs. Our goal is to draw attention to the fact that more liveable urban spaces can be created not only with huge investments, but also with a small budget and the power of community cohesion.
During the 2-days festival we will touch the topics of inclusive and sustainable urban places, the circular economy, the rethinking of Budapest embankment and the co-creation of collaborative neighbourhoods.

Placemaking has been a key notion to revitalise our cities and re-connect with local communities. While placemaking is often associated with tactical urbanism and small-scale public space interventions, it is not limited to temporary projects. In the past decade, community-driven real estate and green infrastructure development projects have jumped scale and become defining elements of European cities.

Placemaking is not only beneficial in improving the quality of public spaces, but is also instrumental in making cities more sustainable, inclusive and just. With activist groups, architecture collectives or cultural producers turning upside-down the traditional logic of real estate development, we have witnessed the emergence of new models to counter real estate speculation and extractive urban development. From inclusive housing projects to solidarity economy initiatives and cultural venues, community-led real estate development projects have mobilised vulnerable groups to offer a more inclusive logic to urban transformation.

At the same time, experiences in many cities have proven that placemaking especially thrives when strong governance ecosystems exist in cities; close ties between civic organisations, urban change agents, local governments, funding agencies, and knowledge institutes. Such networks also prove immensely helpful in times of crisis, when direct alternative social action is required, such as during the COVID-19 pandemic or the Ukraine refugee crisis. However, the different logics from which these urban actors work does not make collaboration and joint project development self-evident. Actors that stand in between organisations, for instance, at the boundaries of local authorities and civil society, are pivotal in building collaborative governance ecosystems.